Overdose deaths by 2019 had reached a peak. By the end of the month and the end of 12-month research period, May 2020 it had already surpassed that horrid marker by over 7,000 deaths in California alone increasing by 26.8%. Across the United States, overdose deaths totaled just under 80,000 with an increase of 21.3%.

One of the main reasons for this dramatic and horrific increase is the use of fentanyl. This specific drug is similar in the effects to morphine but considered 100 times more potent; killing more people than any other drug. Respectively, three times as many people over dosed from drugs than they died of the Covid-19 epidemic. 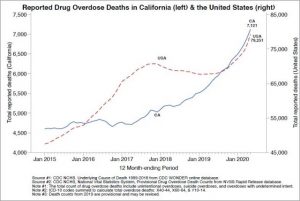 To combat this, the Trump Administration (before leaving office in Jan. 2021) issued articles for new treatment guidelines to allow doctors to prescribe Buprenorphine. Prior to this, doctors and physicians had to take an 8-hour course to obtained a license to prescribe this drug and was a barrier for many physicians. This drug is covered by Medi-Cal.

The Covid-19 epidemic has disrupted a lot of lives between economic falls outs with losing jobs, houses, and insurance, added in with social stressors of isolation due to social distancing; coupled with those previously in treatment, seeing their clinics closed and insurance interrupted, has contributed to the overdose increases.