2020 was considered to be the worst year in America between the virus, business closures, and the fall of the economy. What most people do not discuss is the overdoses and suicides in 2020 due to closures of facilities to receive help, everything moving to online support (overwhelmed and understaffed online mental and substance abuse support), and losing health care coverage due to job loss.

All over the United States, there was a significant increase of overdoses. Most of the overdoses were from heroine laced with fentanyl. Oregon noticed a 40% spike in overdoses while other states like California, Virginia, and Ohio have unfortunately hit record highs. The CDC estimated a huge spike in deaths in the first 4 months of 2020 than all previous years. And while the virus raged on, many substance abuse facilities in states like Florida and Pennsylvania were forced to close or limit their intake due to huge virus exposures. Although there is no set number of overdose deaths (estimated 81,000) for the horrible 2020 year, every life gone is one too many.

Even more disheartening is the mental health of our youth worsening by 9.7% with more frequent cases of depression and anxiety. In September of 2020 more than half of youth ages from 11-17 reported thoughts of suicide and depression from the isolation and loneliness, with a significant number of these youth being LGBTQ+. Even amongst adults, the number of cases has risen significantly than the years prior. Alcohol sales have also risen by 59% being the highest ever recorded in a year.

The staff at Inner Circle Billing urges anyone needing help to seek treatment. 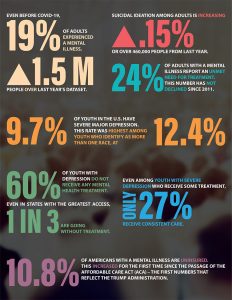